Home » Weather in Mauritius in December

Weather in Mauritius in December 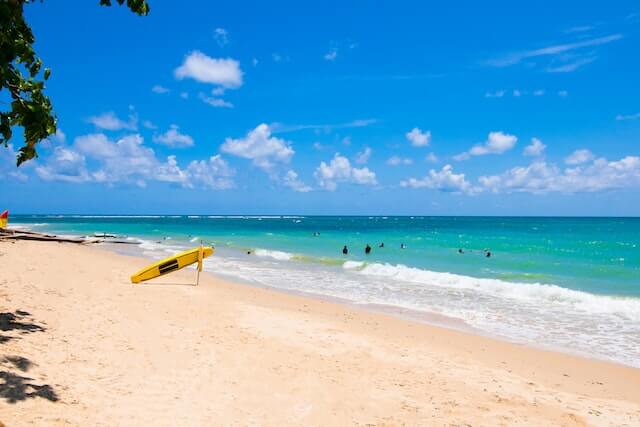 In Mauritius in December it is summer. At the beginning of the twelfth and last month of the year, the weather in Mauritius in December is relatively dry and warm with temperature peaks on land reaching 30o C during the day and a maximum of 28o C in the coastal regions during the night. The summer season also means the rainy season. However, in Mauritius this rainy period is often during the last week, the festive period at the end of the month. A period that also coincides with the birth of many cyclones in this part of the Indian Ocean.

Sunny weather in December in Mauritius

The sunny weather in Mauritius is not constant. There are two maxima (January and August) and two minima (February to April and November). On average over the whole year the sunshine in Mauritius varies between seven and eight hours daily. On the other hand, the length of the day also varies depending on the season. In winter the days are shorter while in summer in December, the sun rises around 5:30 am and sets at 7:05 pm. This makes an average sunshine time of 13h30 per day.

Most of December is dry and warm with rare showers at the end of the day. The humidity level in the air varies according to the weather but the average recorded in recent years is around 77 to 79%. And it depends essentially on the region where we are. For example, in Curepipe and the high plains, the humidity level can exceed 80%, while on the west coast and in Port-Louis the average humidity level is well below 80%, around 70%.

The weather in Mauritius in December - Rainfall

It is during the summer period, therefore from December onwards, that the country experiences the greatest amount of rain. This period extends from December to April. The rainfall also depends on cyclonic formations. However, even if the rains are torrential at times, they do not last more than three to four days at most. These rains are often accompanied by thunderstorms. Coastal areas are rarely affected by summer rainfall.

Weather in Mauritius in December - The temperature

The temperature of the sea water in December in Mauritius mirrors the temperature on land, to within a few degrees Celsius. In December you can enjoy dreamy swims in crystal clear and warm water at a temperature that varies between 26.3oC and 27oC during the long sunny days. This temperature can reach 25oC in the early morning, early evening or if the weather is overcast. The best times for swimming in the morning are around 11am to 1pm and in the afternoon from 3:30pm to sunset to make the most of the ideal temperature.

Places to visit to enjoy the weather in December in Mauritius.

If the heat doesn't scare you and you don't fear sunburn, Port-Louis is the place to be in December. Forget about the lack of decor, the capital is open for business and you can take advantage of it to do some shopping. If you are more of a naturist then enjoy the coolness, and yes even when summer is at its peak, of the Black River Gorges or the botanical garden of Pamplemousses or Curepipe. And mark your passage in Mauritius in the skin, free tanning session on the white sand beaches.

For diving, the weather in December in Mauritius is ideal for the observation of beautiful corals and species of tropical fishes of the reefs that parade in the warm water and warm currents. Moreover, there is no lack of diving spots in Mauritius.  But the best diving spot in summer is at Flic-En-Flac. Of course, the dives depend on the condition of the sea and the weather station of the country informs well in advance if the sea is practicable.

Kitesurfing does not really depend on the season. It is true that the weather in December in Mauritius is relatively dry, warm and not very windy but in the places where kitesurfing is practiced whether it is at Morne Brabant, Poste Lafayette or elsewhere, the sea wind is strong enough to make your sails inflate and your boards fly. Take the opportunity to mix flat, small waves and chop depending on the tide.

The garden is one of the oldest botanical gardens in the Southern Hemisphere. The Sir Seewoosagur Ramgoolam Botanical Garden dates back to the French period. In 1767 the French intendant, Pierre Poivre introduced vegetables, fruits and flowers from all over the world. If you plan to visit the garden, the weather in December in Mauritius should not be a problem since despite the heat on the island, the large fruit trees of the botanical garden offer a place of respite.

Ile aux Cerfs is a picturesque island spread over 87 hectares of land. It is famous for its white sandy beaches, turquoise lagoons and for the wide range of restaurants, water sports and land-based activities offered. Ile aux Cerfs is open daily from 9:00 am to 6:00 pm. Shuttle boat service is available every 30 minutes from Pointe Maurice to the Ile aux Cerfs Masala jetty and back. The weather in December in Mauritius allows to make the crossing every day except when there are swells outside the lagoon caused by a cyclone in the area.