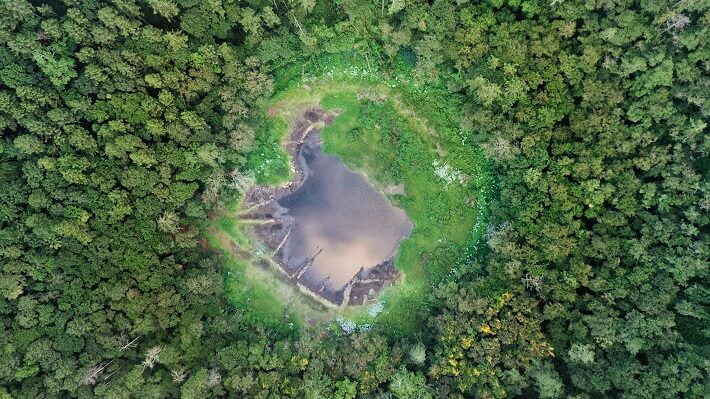 Located in the heart of the town of Curepipe is the dormant volcano of the Trou aux Cerfs. About 1 km from the administrative town of Curepipe, it is one of the most famous natural tourist attractions in Mauritius.

About eight million years ago, the burning earth poured all its lava into the Indian Ocean, giving rise to a beautiful island: Mauritius. Today, Mauritius no longer records any volcanic activity. However, its landscape bears the marks of its geological history. With a diameter of 350 metres and a depth of 100 metres, the Trou-aux-Cerfs crater is living proof that Mauritius is a volcanic island.

The dormant volcanic crater lies at about 605 metres above sea level. Curiously, the Trou aux Cerfs is also known as the "Murr's volcano". Today, life has returned. In contrast to typical volcanic characteristics, the Trou aux Cerfs crater is surrounded by a vast area of lush forest: large pine trees, endemic plants, and ferns among others.

In the centre of the crater there is a small lake. The Trou aux Cerfs volcano is believed to have erupted once and has been dormant for 700,000 years. Experts believe that it is possible that it will become active again.

From the viewpoint, you will have a spectacular view over most of Mauritius. For nature lovers and nature photography enthusiasts, the Trou aux Cerfs site is a magnificent spot. It offers a 360-degree view of much of Mauritius, including the town of Curepipe, and a majestic view of the Rempart mountain, Trois Mamelles and the Port-Louis and Moka mountain range. Some claim that when the sky is clear, it is possible to see as far as Reunion Island.

When you are at the top, you will see that the town of Curepipe dominates the landscape below. Turn your head to the west and you will see the magnificent Trois-Mamelles mountain as well as Mont St-Pierre. According to some people who have visited the place after dark, you can even see the lights of Reunion Island shining in the middle of the ocean.

The Trou aux Cerfs: a good place to unwind

Following a track, you can walk around it, and enjoy the small kiosks to admire the landscape. It reminds us of the island's volcanic past. From the top of its 600 meters of altitude, the Trou aux Cerfs watches over Curepipe. Many people take advantage of this beautiful place to recharge their batteries: to do their sport, to walk, to meditate, or simply to get some fresh air. The more adventurous contemplate the idea of descending to the bottom of the crater.

While many joggers walk around the crater, few visit the bottom. And for good reason, it is now almost inaccessible. According to legend, hunters once pushed deer to the bottom of the hole to trap them. This would explain the name given to this volcano. However, the plains have given way to a freshwater lake. An oasis of peace, one might say.

In 2014, a path was created to allow tourists and hikers to go down to the bottom to see the spectacle up close. As it was considered dangerous, the vegetation quickly took over and today the path has disappeared.

Although it is not impossible to go down, this adventure remains dangerous. You will have to make your way through the ferns and stay on your feet to avoid slipping on the muddy slope, and the ground is swampy. You should also forget about taking a dip in the lake because of the thick silt.

The access to the heart of the sleeping volcano is not easy and requires a lot of effort. But the most courageous will perhaps have the chance to feel the earth's energy vibrating under their feet.