Home » The Sega: the national music of Mauritius

The Sega: the national music of Mauritius 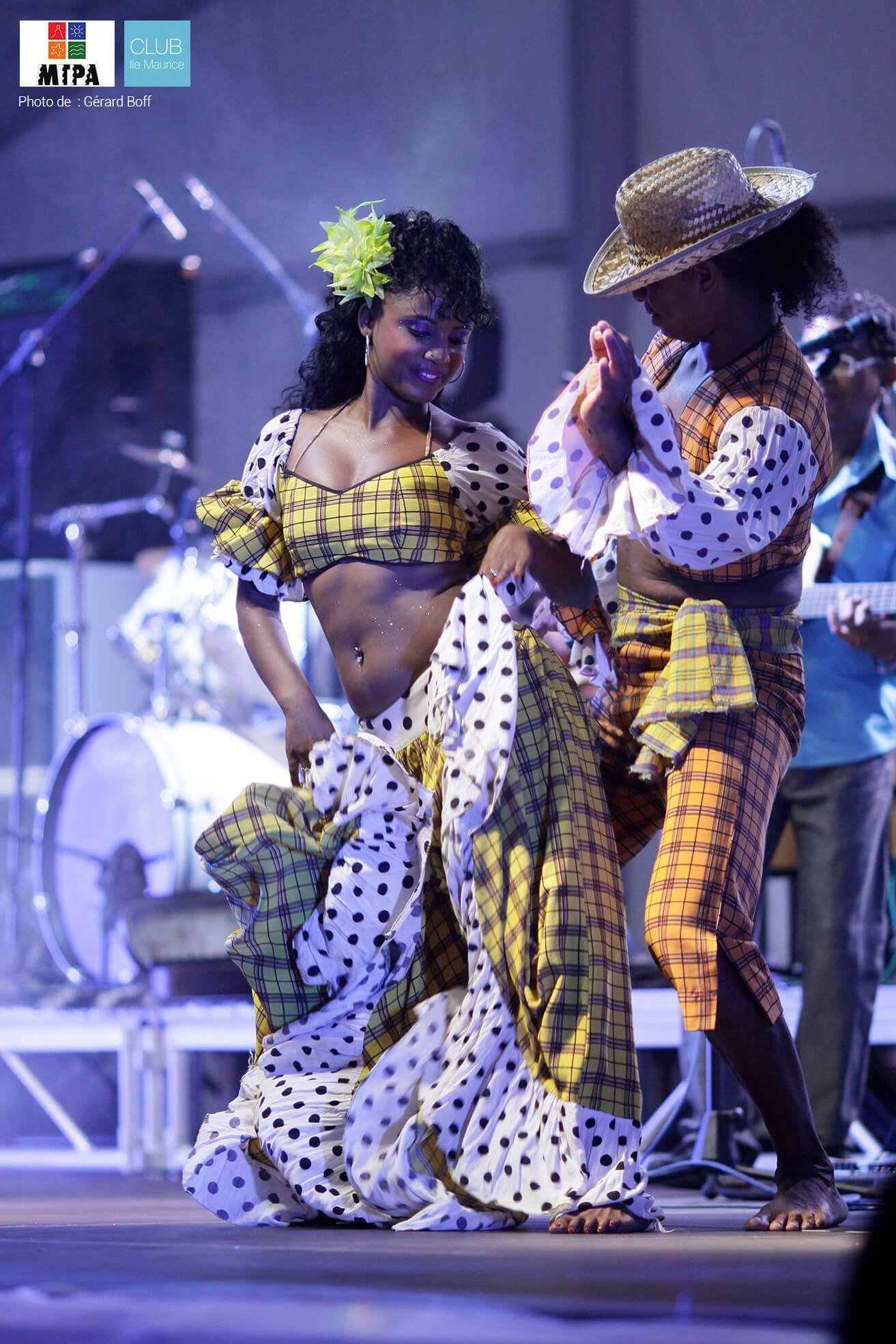 The origin of Sega in Mauritius

"Grand festin pé déroulé bord la mer, dimoun finn entouré, autour enn grand difé "…This sentence comes from one of the most famous local songs in Mauritius. This phrase is also synonymous with the typical Sega atmosphere on the island. Sega is a music that dates back to the era of slavery, transported from Africa. Without a doubt, Sega brings joy and good humour to the present moment. In the past, the ancestors had only this music to entertain themselves and gather for a few hours outside the houses or other fields where they worked night and day. The Sega is the symbol of the elders who gradually forged their identity in this land of exile. Improvised music and dancing around a campfire: a way for these uprooted souls to forget their difficult living conditions.

In the history of Mauritius, unlike the settlers of the time, slaves could not have instruments such as pianos or guitars. They had to improvise with the means at hand. No one knows how, but they discovered that the dried skin of the goats could make a rhythmic and dancing sound. Thus was born the ravanne. Circular in shape, this musical instrument, which from afar resembles the djembes of Africa, is indispensable and inseparable from the Sega. A goatskin percussion instrument ("lapo cabri" in Creole) stretched over a circular wooden frame, it resembles a large drum 30 to 70 cm in diameter.

The instruments of the Segatiers

Unlike other percussion instruments, the ravanne is struck with both hands. Unlike the conga or bongo, the ravanne drummer (the ravannier) plays sitting, squatting or standing with one leg slightly higher than the other. The aim is to keep the ravanne on the thigh, leaving both hands free to play. Ravanners should also warm their ravanne regularly to tighten the skin and ensure that the instrument resonates. This is why the Sega was traditionally played around a large bonfire.

But the ravanne is not the only instrument used in Sega. Two other traditional instruments accompany the ravanne. One finds the maravanne and the triangle. The first is a rectangular box made of dried sugar cane shoots and filled with dried seeds, which gives the rhythmic and high-pitched sound of the Sega. The triangle is an iron bar bent into the shape of a triangle and played rhythmically with a small metal rod. This rod can also be replaced by the top part of a rum or beer bottle.

Ravanne, maravanne and triangle are the three basic instruments of the Séga of Mauritius (séga tipik) "Batté batté nou la main mettre son dan nou lé corps! Maravanne triangle the accordion violin "… These are the lyrics of another local song well appreciated by Mauritians. Some say that the word ravanne is of Tamil origin while others say that the word "Séga" comes from tchega, a dance from Mozambique or the Swahili word "séga".

While the slaves enjoyed the Sega dance to their hearts' content, the first settlers and missionaries disapproved of evenings when the slaves let themselves go to the sound of the ravanne. They considered the dance too erotic, the rum too common and the fights too frequent. For the slaves, however, it was the best way to forget their difficulties in the cane fields and on the estates. They would gather after sunset around a campfire and invent Creole riddles (sirandanes). They sang and danced all night to rhythms that had been theirs in their African homeland. The music was disapproved of and even banned by the Catholic Church and the colonial authorities.

Evolution of Sega in Mauritius

The Sega began to evolve, losing its ritual character in the early 1900s. Instead, the music became a vehicle for improvised song, using the Creole language to create puns and double meanings, all essential aspects of the genre. After the abolition of slavery, black and mixed-race musicians who still lived in the circle of white landowners while living in their villages developed a more "civilised" form of Sega, mixing traditional elements with European instruments.

Later, Indian percussion instruments such as the dholok and tabla were incorporated into the music, giving rise to the Sega bhojpuri. Other variants developed organically. Notably the Seggae, a fusion of Sega and Reggae. Seggae is played by artists from the Rastafari community such as Kaya and Racine Tatane.

On the neighbouring islands, Sega has also taken on new forms. The drum sega and kordeon sega in Rodrigues, the maloya in Reunion Island or the moutia in the Seychelles.

Ti Frère: the symbol of the Mauritian Sega

From his real name Joseph Alfonse Ravaton, Ti Frère learned sega and ballads by accompanying his father, himself a famous sega musician. His reputation grew through local competitions in different villages.

Ti Frère became a local hero and recorded the first 45-rpm vinyl record ever released in Mauritius in 1948. At Le Morne, the Creole community took advantage of the gathering to reaffirm its cultural identity and it was a landmark event. Subsequently, sega became an island-wide art form and Ti Frère was crowned "King of Sega", adding the diatonic accordion to the traditional accompaniment of the ravanne, maravanne and triangle trio. He became a master of spontaneity, telling the ups and downs of Mauritian life through his music.

While Ti Frère discreetly revived sega in private circles in the 1950s, Serge Lebrasse was another important figure in the diffusion of music from shadow to light. At the age of 15, he moved with his family from the town of Rose-Hill to Quartier Militaire, the village where Ti Frère lived. By the mid-1960s, the sega had become a symbol of pride and national identity for Mauritius. A new generation began to sing it and the Dragon label recorded most of the future sega stars, including Roger and Marie-Josée Clency, Alain Permal and Georgie Joe.

With the advent of electric instruments (drums, synthesizer, bass guitars and electric guitars) in the 1970s, the influence of pop, funk and jazz music began to make itself felt on the sega. The dancefloors began to squeak to the sound of a funky sega beat.

Mauritians from all local communities (European, African, Indian, Chinese) all danced and enjoyed sega. The music then spread with the same success to the other Creole islands of the region: Seychelles, Reunion, Rodrigues and Chagos. Even the non-Creole islands like Madagascar and Comoros danced to a new, modern sega sound.

Sega is generally danced by couples, without contact between men and women. The hips sway, the arms are raised and the feet sweep the floor while taking lateral steps. Often in the middle of the dance, the couple kneels. Their busts meet and bend over each other, eroticizing each other, a step called "down below".

In today's sega, the traditional ravanne tends to be replaced by a ravanne made of synthetic skin or African djembe. As these skins remain taut, there is no need to warm the instruments, making them more practical for concert halls and hotels. But these alternatives will never replace the distinctive sound of a stretched goatskin. Unfortunately, there are few manufacturers left who make the traditional ravanne. Goat skins are also more difficult to obtain these days. Indeed, goat breeding is less and less practiced in Mauritius.

The slaves and other immigrants who landed in Ile-de-France created an island culture that today unites all the communities on the island. Their Mauritian descendants of Chinese, Indian, European and African origin all speak the Creole language.