10 best places to visit in Mauritius 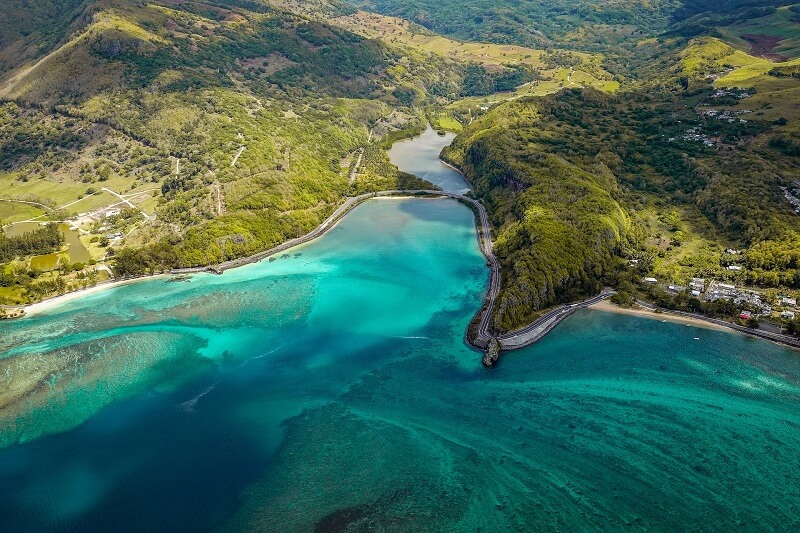 Here are our top 10 places to visit in Mauritius; places not to be missed for unforgettable holidays on the island.

This small village on the northern coast of Mauritius owes its name to all the shipwrecks that took place on this part of the country's coast. History reminds us that it was also here that the English attacked the Île-de-France in 1810. The symbol of this village, a church with a red roof overlooking the bay. Cap Malheureux often appears on postcards and the Chapelle Notre-Dame Auxiliatrice is very lively and on Sundays, many faithfuls come to hear mass.

Many tourists also come to get married in this little corner of paradise. The view of the Coin de Mire, an islet a few kilometres north of the main island, is breathtaking. The whole thing is in front of a small sandy beach where fishermen pull in their boats. The view over the lagoon is incredible.

The east coast of Mauritius is home to a real jewel. An uninhabited island, but very popular with tourists and Mauritians, who are addicted to going out to sea. It is undoubtedly one of the most beautiful tourist sites of the island and for more than a decade now, Ile aux Cerfs has become a must-see place. However, Ile aux Cerfs is only accessible by sea so you need a boat.

To discover this emblematic site of Mauritius, you can take a trip by water taxi which runs shuttles between Trou d'Eau Douce beach and Ile aux Cerfs every 20 minutes, starting at 9am. Alternatively, other options include speedboat, catamaran or, better still, pirate ship excursions! On Île aux Cerfs, you can enjoy the pleasures of the beach and the many water sports. In addition to the dreamy beach, visitors are also spoilt for choice by the lush tropical vegetation, mangrove swamps and waterfalls accessible by boat.

Located between Le Morne and Baie du Cap, the village of Chamarel is very popular for one of the main natural attractions of the island. Located in the middle of a private domain (access for a fee), the Land of the seven colours of Chamarel is a unique attraction in the world.

With its seven colour variations, ranging from ochre, brown, red and purple, this phenomenon created by ancient volcanic activity on the island has been exposed by erosion for centuries. This mixed earth is very special, as the colours never separate. Visitors will also be spoiled by the presence of fauna from Java deer to turtles.

We stay in the south of Mauritius and the fantastic Rochester Falls. This magnificent rock structure rises to a height of more than 10 metres and is famous for its rectangular rocks. Rochester Falls is above all a peaceful and quiet place, accessible by crossing sugar cane fields, so the waterfall is lost in the countryside.

The rumbling sounds can be heard for miles around and the waterfall is only accessible by pick-up truck or by walking through the plantations. A closer look reveals a grandiose gorge with lush vegetation from which the waterfall flows. There is no doubt that Rochester Falls is one of the best excursions in Mauritius. So there is no reason to deprive yourself of such a visit when it is free…

Let's leave the south and head for the west coast. If you really want a nature adventure at its best, the Black River Gorges are among one of the best places to visit in Mauritius, especially for all hiking enthusiasts who dream of discovering the full beauty of Mauritian nature. Without a doubt, the Black River Gorges is the largest national park in the country and is famous for its waterfalls, panoramic views, but also its hiking trails. Even though most of the park lies to the west, the driest coast of Mauritius, its elevated position makes it a cool place.

The park covers an area of 6,754 hectares and with the help of the guides, you will discover the natural heritage of Mauritius in this unique area which is also the location of one of the rarest forests in the world. It is home to approximately 311 species of native and endemic flowering plants and 9 species of birds, which are only found in Mauritius. This hike will take you into the heart of the native forest with many panoramic views.

This place is 1,640 square metres in size and is located in the district of Port Louis, the island's capital. It was here that the modern diaspora of indentured labourers, commonly known as indentured labourers, began. In 1834, the British government chose Mauritius as the first site of its great conquest.

Between 1834 and 1920, at least half a million indentured labourers from India descended on the Aapravasi Ghat to work on the cane plantations in Mauritius or to be transferred to other sites in Reunion, Australia, southern and eastern Africa. Moreover, the ruins of the Aapravasi Ghat bear witness to the first explicit manifestations of what was later to become a global economic system and one of the largest migratory movements in the world.

Do you love horse racing? Are you a good bettor? Do you like crowds? The Champ de Mars is one of the best places to visit in Mauritius.. Located less than 3 kilometres from the Gare Victoria, getting to the Champ de Mars is a real health trip. After just a few minutes' walk, via the Jardin de la Compagnie and Rue de la Poudrière, the Champ de Mars awaits you upstream.

However, you should still go on a Saturday or Sunday, depending on the schedule of the Mauritius Turf Club. Unlike in European countries and South Africa, horse racing in Mauritius is mainly done on weekends. But why is Mauritian racing special? It is one of the few racecourses in the world where the track is closest to the public.

It is one of the most popular beaches in Mauritius for locals and tourists alike because of its unique marine park and beautiful hotels in the area. This part of the island has a long beach with bright sand and crystal clear water. Without a doubt, Blue Bay is the most unspoilt area in terms of coral reefs and the corals are superb.

This beach is ideal for sailing, but also for surfing near Cocos Island, which is accessible by boat. Blue Bay is also very popular with snorkelers who can admire the still living corals and countless fish of all colours.