The breaking waves of Gris Gris 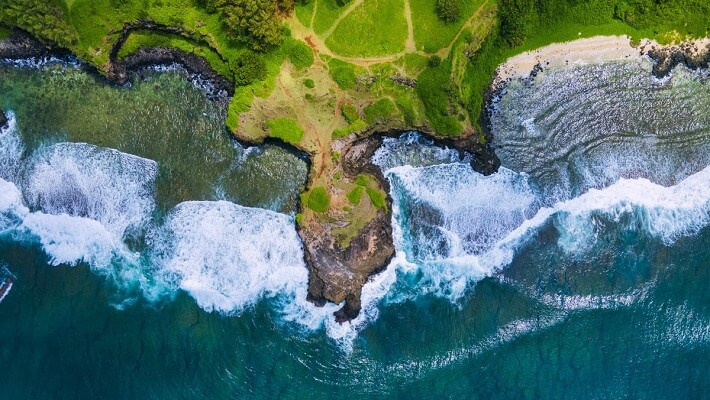 The south of Mauritius is home to some unusual places and is only revealed to those who venture there to discover them: Gris Gris. The poet Robert Edward Hart described this place in poems saying that nothing is sweeter to his heart than this land where he lived. He even wanted his ashes to be scattered here so that a rose would bloom. Between the crashing waves, the Rochester Rocks or the Rochester Falls, discover this part of the island - blessed by nature.

Grey-grey, a light wind sweeps through your hair and this immaculate view stuns you - you are facing this sea - so blue - which looks like a beautiful fresco. But where does the name of this region come from? No need to let your imagination run wild. A sign at the entrance to the spot tells you more about this place. It is said that between the coral reef and the cliffs there is a rock that looks like a praying nun. For those with a fertile imagination, they can also see in gri-gris the silhouette of a witch doing witchcraft. Gris-Gris was also the name of the dog of the Abbé de la Caille, who arrived on the island of France in 1753. The poet Jean Toulet wrote an ode to it, describing Gris-Gris as a "Sweet beach where my soul was born, Savannah in the flowers that the ocean soaked with tears and the sun of fire". Visiting the beach in September 1886, the poet Paul Jean Toulet found the place full of "terror and fatalism not without sweetness. "

Not far from the beach of Gris-Gris, you can see the restaurant Chez Rosy's, run by Rosy Gounden. You can't leave Gris-Gris without visiting its cliff, known as La Roche qui Pleure. It owes its name to the constant trickle of sea water and the roar of the waves against the rock. Gris-Gris has many anecdotes about it. It is said that The Weeping Rock creates the illusion of tears running down the cliffs as the waves recede and that curiously, the features of the poet Robert Edward Hart appear to be carved into the rocks by erosion. The lack of a coral reef, the basaltic rocks and the powerful wave action have formed amazing shapes that you won't find anywhere else.

The beach is the one at the southernmost tip of the island. In contrast to other beaches in the south, popular for their calm waters, it offers rough seas. It is the only place in Mauritius where swimming is strongly discouraged for amateurs and professionals alike, as the strong currents and the huge waves that break on this part of the island make the sea totally impassable.

Don't be fooled by this beautiful golden sandy beach and azure sea. Gris Gris is an extremely dangerous beach! Stay away from the water and enjoy the view by taking a path at the back of the car park that will lead you to the Weeping Rock. Here you will have a great view of a large rock where the waves break with great violence, accompanied by a great thud.

The vast majority of tourists who travel to Mauritius do so for the beautiful beaches and islands the country has to offer, and some are dedicated to diving. It has to be said that the seabed and wildlife are some of the most beautiful in the world - but no diving or swimming near Gris Gris. The beach is mostly visited for its wild beauty rather than for swimming.

The wild landscape of Gris Gris

Gris-Gris beach is surrounded by a barrier, but not the one you might think. Indeed, if the coral reef is non-existent at this point of the island, the beach is really encircled by volcanic rock cliffs, thus giving this landscape the appearance of Mauritian Brittany. But the most impressive part of this place is the famous part of the cliff that seems to cry. A real natural curiosity, located on the east side of the beach at the level of an advanced rock. It is a place where water rushes into the rocks and forms small streams. All this gives visitors the impression that the rock is crying. If we are far from the postcard landscapes that Mauritius can offer, the waves on the cliffs of Gris-Gris beach are an absolutely magnificent sight and certainly worth a diversion for a romantic walk.

Located not far from the village of Souillac, the beach of Gris-Gris is a curiosity of nature on this island. Although the water temperature is very high all over the country, no one is used to worrying about the waters of Gris Gris since swimming is forbidden.

The beach being at the southern tip of the island, the winds from the Indian Ocean are much stronger than on the other beaches of the island. Finally, like the rest of Mauritius, the beach temperatures remain very mild and even warm all year round.

5 things to visit near Gris Gris