Home » Flag of Mauritius: The quadricolour

Flag of Mauritius: The quadricolour 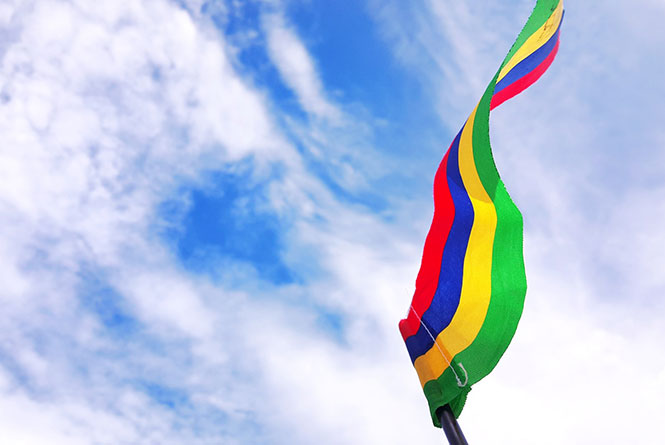 The Mauritian flag was officially adopted on 12 March 1968. It consists of four colours represented by four horizontal stripes: red, blue, yellow and green. There are no specific shades of colours but it is customary to adopt colours that conform to those first adopted in the country. The flag has had two distinct names in two languages: "Les quatre bandes" in French and "The four stripes" in English. The size and proportions of each stripe are equal so that there is a certain harmony between the stripes.

The four horizontal stripes that make up the Mauritian flag were not chosen at random. Although the colours of the flag are the result of a certain freedom of the country after colonisation, they represent very distinct ideas. The first stripe, which is red, is a strong symbol of the country. It represents the blood shed by slaves during the colonisation that raged in the country. The second stripe is the blue one which has a double meaning. It represents both the sky and the Indian Ocean in which the island is located. The third stripe is yellow and is primarily a representation of the sun. The latter holds an important place. But the colour is also the image of the dream of purification through the rays and the light. The last band is green and this represents the rich nature of the country. It is also the symbol of the sugar cane, which covers a large part of the island's surface. It is also a pillar that has its place in the country's economy.

Who is Gurudutt Moher?

Ask around who Gurudutt Moher is. Having passed away on 7 October 2017, at the age of 93, this name is not very familiar to Mauritians. Yet, it was he who, on the eve of Mauritius' Independence in 1968, gave life to our colourful flag. Today, Jean-Georges Prosper is better remembered as the author of our "Motherland", the anthem of Mauritius. We would therefore like to pay tribute to the creator of our national "red-blue-yellow-green".

The coat of arms of Mauritius consists of a sugar cane held by a stag and a Dodo, and a shield divided into four sections. The country's motto, "Stella clavisque maris indici" (Star and key of the Indian Ocean) is displayed in Latin on a ribbon just below.

Prior to the adoption of the present flag, Mauritius had other historical flags that have marked the island through the centuries. The first flag of the country dates back to 1638. It was, at that time, called the flag of the Dutch East India Company. The latter adopted the colours of France but in a different order and in horizontal bands: red, white and blue. In the middle of the white band was a large letter V and two smaller letters O and C. The country used the flag for the last time in 1970.