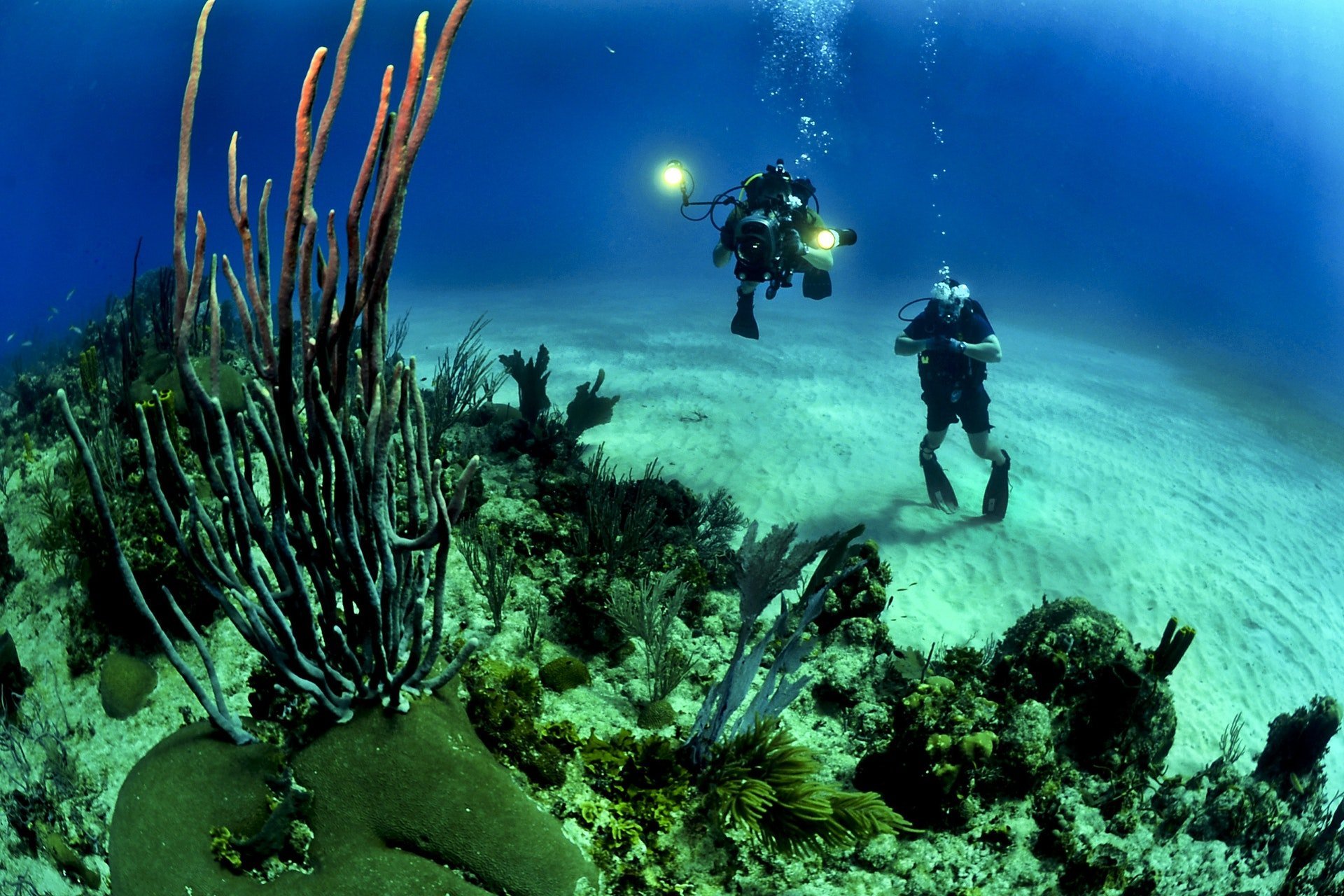 Among the dive sites in Mauritius that you might enjoy, don't miss the Cathedral - one of the most popular dives in Mauritius. Situated off the coast of Flic-en-Flac in the West of the island, the beauty of this site is unbelievable. Other popular spots include Gunner's Coin (Coin de Mire), where you can see large parrotfish on every dive; Whale Rock (26 to 38 metres deep) where the lucky ones can come face to face with a hammerhead shark; and Holt's Rock (16 to 25 metres deep) whose name suggests the formation of huge rocks under the sea. If you're a beginner, head to the Blue Bay Marine Park in the southeast - ideal for those just starting out. What makes diving in Mauritius unique is the proximity of the shoreline and the dive site. Although most of the challenging dive sites are outside the barrier reef, they are only 20 minutes by boat.

Preservation is a priority for dive sites in Mauritius

Diving centres in Mauritius place a strong emphasis on the preservation of the fragile underwater landscape of the Indian Ocean. Here, you won't have to ask for more space in a crowded dive site. Nor will you see anchored boats destroying a specific section of coral. Mooring buoys are used instead, in accordance with the guidelines of the Mauritius Scuba Diving Association (MSDA).

Diving in Mauritius: the North and North-West region

A wide variety of dives in the northern region offer fascinating dives to depths of only 13 metres. Colourful corals, dazzling marine life and wrecks of old ships and boats sunk to create artificial reefs all provide a platform for diving all year round.

Diving in Mauritius: the West and South-West region

Canyons, caves and chimneys: the west is the leeward bank of Mauritius and therefore enjoys the advantages of a microclimate all year round. In this area, dives are made outside the reef. The underwater landscapes of Flic-en-Flac have been formed by the currents. In the depths you will discover canyons, chimneys and an impressive range of caves. Further south, near the beach of Le Morne and as far as that of Rivière Noire, the coral sites are more and more colourful than on the east coast and this part of the island is visited by dolphins and sperm whales.

Diving in Mauritius: the East and South-East region

Just off the east coast, the beautiful lagoon along the coast is dotted with numerous passes through the reef, providing easy access to the open sea. This area is rich in plankton and attracts a wide variety of pelagic species. Of all the passes, the Belle Mare pass is probably the most exceptional. Diving here is a real experience because of the strong currents around it and the spectacular concentration of fish and invertebrates it attracts.

Best time to dive in Mauritius

Diving in Mauritius is practicable all year round with very little change in the diving conditions, except when the weather deteriorates with the presence of cyclones or anticyclones. Therefore, the best time to dive is from May to November as the winds are not as strong. Please see our Mauritius climate page for more information.

In summer, the water temperature is appreciable. It is quite warm, even in winter, and visibility is normally above 20 metres at most dive sites and some are known to be 50 metres or more.

The marine life of Mauritius

Mauritius is considered a veritable Garden of Eden for tourists in search of lush nature. It is surrounded almost entirely by an impressive coral reef, the island has a lagoon whose calm and clear waters are an undisputed paradise for divers. The sea surrounding the island has a rich ecosystem that hides a real treasure and the most amazing and varied forms of life. Indeed, fish, molluscs and crustaceans abound within the coral reef where they find refuge as well as food. As far as fish are concerned, a vast number of species can be observed, including bonito and marlin, which are highly appreciated by deep-sea fishing enthusiasts, or the clownfish, which is emblematic of the coral reefs. Mauritian waters are also home to dreaded fish such as the barracuda or lion fish and jellyfish. In the heart of the lagoon, we also come across some remarkable fish such as the moon fish or the diodon which swells up with water when it feels threatened.

Several crustaceans and molluscs also represent the aquatic fauna of Mauritius. It is thus frequent to meet lobsters, shrimps or crabs such as the "faye faye" crab or the "eleven spotted" crab very popular with gourmets. Similarly, the underwater world abounds in surprising molluscs and shellfish such as sea cucumbers, clams and prawns.

Sea state and temperatures before your dive

Before diving in Mauritius, it is essential to take into account the sea conditions in the region. The temperature of the sea around the island varies according to the two changing seasons, summer and winter. Obviously, the sea temperature will be higher in summer, varying from 26 to 29° C, and slightly lower in winter, varying from 23 to 25° C. However, you should note that the cyclone season in Mauritius is from January to March. Cyclones that occur in Mauritius are not likely to cause any affliction and the island is equipped with state-of-the-art technology to prevent disasters.

This dive is very popular with all divers who come to the island. Divers start inside the lagoon in water less than 5 metres deep and as they descend, the current carries them through the pass, past rocky pinnacles and coral walls. While the divers are drifting, there is a good chance of seeing grey reef sharks. This incredible drift dive will take divers through waters where eagle rays, sting rays, turtles, white tip reef sharks and other large pelagic species can be found. The drift dive ends on the outer wall of the reef where the maximum depth is 30 metres.

The Cathedral off the coast of Flic-en-Flac is ideal for lovers of marine photography. The dramatic topography includes large caves, grottoes and arches and when the light passes through, the view is breathtaking. The dive starts at around 18 metres and the deepest point is around 30 metres from the sandy bottom. The walls along this section are home to many different marine species such as grouper, wrasse, angelfish and clownfish. Divers should watch for large moray eels and crustaceans hiding under the ledges and in coral crevices.

The wreck of the Hoi Siong 6, lies on an artificial reef at the bottom of the Indian Ocean at a depth of about 29 metres. This incredible transformation attracts all kinds of marine life and is perfect for all levels of divers. The wreck is home to many species of large fish such as barracuda, tuna, lionfish and butterflyfish. With the incredible marine life and the sunken wreck, this dive is every underwater photographer's dream.

The Stella Mari was sunk in 1987 by the Mauritius Conservation Society (MSC) to create an artificial reef. The wreck of the Stella Mari lies at an average depth of 23 metres. It is located on a sandy bottom and next to a rocky reef. The wreck is still intact and there is only a small amount of marine growth on the ship, except for algae, small soft corals and other marine organisms such as anemones and sea urchins. The most incredible part of the dive is getting close to the ship as it sits on the seabed. There is a lot of marine life around the ship, such as giant moray eels, lion fish, parrot fish, monkfish, leaf fish, mackerel, stonefish, scorpion fish and a number of other creatures living on the bottom.

Whale Rock is perfect for intermediate level divers to experiment as it takes divers to varying depths. Whale Rock is a great dive site with an abundance of marine life such as angel fish, butterfly fish, triggerfish, small moray eels, parrotfish, wrasse and clown fish. From time to time in summer it is possible to observe some of the larger fish species such as swordfish and hammerhead sharks.

The wreck of the Djabeda

Located off the Cap Malheureux, the Djabeda is a wreck of a Japanese fishing boat 44 m long and 10 m high. Diving on this site is recommended only for advanced divers. The site is full of interesting sea creatures including moray eels, trigger fish, stone fish, lion fish, parrot fish, leaf fish and sea slugs. It is possible to dive the wreck of Djabeda all year round.

Diving in Mauritius: the other diving sites

Due to the lack of reef, there are no real dive sites off the southern part of Mauritius, but just along the coast at the south-eastern corner is the Blue Bay Marine Park, which became a protected area in the year 2000. It is an excellent bet for beginners or snorkelers as the lagoon is only 5-6m deep, with crystal clear waters full of all kinds of tropical fish such as damselfish, trumpet fish and sailfish.

Off the north coast, the surrounding islets are still easily accessible if you don't hesitate to take a short boat trip to reach them. The famous Shark Pit dive site is hosted by Flat Island, where hardcore divers can see white tip, black tip and grey reef sharks swimming freely in the pit, due to the availability of rich oxygen from the strong thrust and crashing waves.