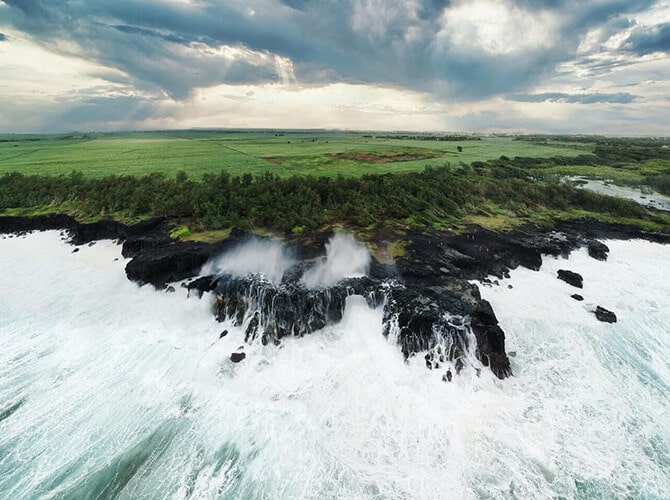 In the southern hemisphere, in this part of the Indian Ocean, July is known as the heart of the cold and wet season.  It is the beginning of the southern winter but Mauritius does not lose its capacity as a seductive island and still attracts many tourists in winter.  Indeed, the winter season is at its peak in early July and lasts until September.  During this part of the year, the average temperature can reach up to 22oC. All in all, don't be disappointed if you don't get to make snowmen, as winter in the tropics is not like the winter you would certainly experience in Europe.  It is also worth noting that with this climate, the month of July is just as particular for its unexpected drops in temperature and here temperatures can drop above 23oC.  In winter, however, there is no risk of a tropical cyclone. However, be prepared to deal with the cold air currents of the southern Mascarene highs.

July, the shortest days of winter in Mauritius

For those looking for long days in the sun, July is the ideal month.  During this month, the amount of sunshine is constant.  However, according to meteorologists, the shortest day of the month is between July 1 and July 29 with only 10 hours of sunshine, while the longest day is only four minutes long, between July 29 and August 2 with an estimated 10 hours of sunshine.  On the other hand, you will be lucky to experience winter rains in Mauritius during the month of July. Rainfall is most likely to be observed at this time of the year. However, rainfall is least likely towards the middle of the month, around 10 July.  July is therefore one of the driest months of the year in Mauritius with an average of 76 mm of rainfall throughout the month, compared to 228 mm in February alone!

Temperature and wind in winter

We will stay with the logic of things with the presence of cloud bands over the country during July.  Throughout July, the median cloud cover varies between 56% and 62%.  At this time of year, the sky tends to become cloudier and the median cloud cover increases by 6% between the beginning and end of July.  In terms of wind, wind speeds range from 1 m/s to 7 m/s, which is considered a light breeze. These breezes rarely exceed 9 m/s when the highest average wind speed is 4 m/s and blows towards the end of the month, around 30 July, when the maximum daily average wind speed is a moderate 7 m/s. At this time of year, the wind comes mainly from the east, followed by the southeast.

Let's leave the land and find out what happens at sea. At this time of year, the sea water temperature is still relatively warm with temperatures reaching 25oC in some areas.  So you shouldn't miss out on water activities…

Places to visit in July in Mauritius

Belle Mare Beach is one of the most popular beaches in Mauritius. This long white sandy beach located on the east coast offers a variety of water sports in the lagoon such as windsurfing, sailing, diving and snorkelling.

Mauritius in July in Grand Bay

Another popular beach is Grand Bay. This beach offers a variety of attractions, including water sports such as waterskiing and windsurfing and also includes a number of nightclubs, bars and restaurants.

On the other hand, Mont Choisy beach located between Pointe aux Cannoniers and Mont Choisy is almost 3 km long and offers a long bay of white sand and turquoise water, lined with casuarina trees. During the week, this beach is relatively quiet, but if you come here at the weekend, it can get very busy.

Gris-Gris beach is located in the south of the island, a few kilometres from the village of Souillac. This beach offers tourists and locals alike magnificent panoramic views from its cliff tops. There is also a small garden, which is a popular place for sunbathing.

It is the home of the extinct Dodo bird, which no longer flies. The Natural History Museum in Port Louis is one of the only museums in the world to display a real Dodo skeleton. The museum also has a collection of over 50,000 books and provides information on other indigenous animals such as the giant tortoise. Admission to this museum is also free, so it's definitely worth a visit if it's a rainy day or if you're stuck for something to do.