Climate in Mauritius - The 2022 Guide 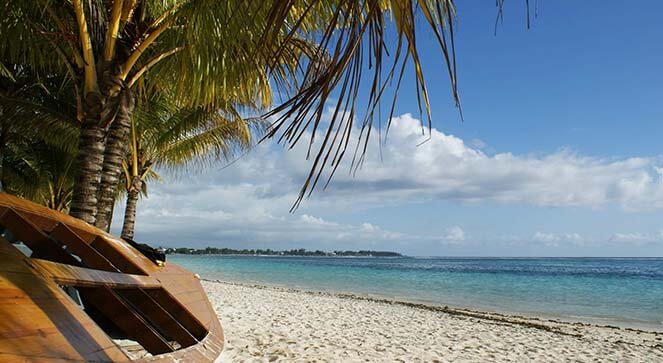 The climate in Mauritius is for all tastes. You can visit the country from one end of the year to the other depending on what you wish to experience. Although the climate in Mauritius has two seasons which are reversed from the European climate, the country also has a period of cyclone development mainly from January to March, which is a good part of the summer season between October and March.

The climate in Mauritius in summer

What if we told you that you could have a Christmas under the stars? Yes, you can! The climate in Mauritius in the summer months from November to April is relatively hot and humid with a warm sea and temperatures ranging from 27oC to 33oC. December is the driest month in the Mauritian calendar with little risk of cyclonic formation. That said, water sports and diving enthusiasts will be delighted to enjoy the Mauritian lagoon and its unique coral reefs. Summer also offers many opportunities for activities in the island's endemic forests and excursions to the country's various coasts. Being close to the Tropic of Capricorn, Mauritius enjoys a high degree of sunshine where the sun is almost permanent and is the major cause of high temperatures, although this is mitigated by the influences of the ocean, whose inertia reduces diurnal and seasonal temperature variations.

However, the summer is also a period when the country records the highest rainfall. This starts from January and ends towards the end of March. During these three months, some parts of Mauritius can record up to 300mm of rainfall. However, the rainfall does not affect the holidays as the coastal areas are generally less rainy than the central areas. So we strongly advise you not to forget your umbrellas or overcoats when you go out. As mentioned above, summer is the best time of the year for scuba diving and snorkelling in the crystal clear lagoon as the water temperature is much better and fishy. Fish means fishing, so a deep-sea fishing trip on one of our many pleasure boats would not go amiss.

The cyclone season also influences the climate in Mauritius which runs from November to April. Most of the cyclones avoid the island. However, if they come close enough, the bad weather can affect the vegetation and some wooden constructions. It should be noted that the resorts have been built to withstand the strongest winds, so no worries! On the contrary, cyclones in Mauritius offer a real spectacle on the seashore with the swells.

Notice to lovers of seasonal fruit

The climate in Mauritius is very beneficial to fruit trees. During the whole summer season, fruits abound on the trees including letchis, mangoes of all flavours and colours, pineapple, bananas, longans, passion fruit, watermelon to name but a few juicy examples. This means that if you are addicted to tropical fruits, travel in summer and you will be served! However, a spectacular sight is presented to the world in late November or early December. Huge flamboyants bloom adding a red colour to the Mauritian scenery.

When it is unbearably hot in France and elsewhere, Mauritius will enter its 6 month winter where the temperature will drop by 5 to 10 degrees creating a mild and comfortable climate. The Southern Winter which runs from May to October is a drier period, during which temperatures average 17oC to 25C. Thus, the southern winter is suitable for those who prefer milder temperatures, even a little cooler in the evening (17°/18°C) and for surfers who will benefit from the predominance of the trade winds (June to August). The water temperature varies from 20oC in August to 27oC in March.

As a bonus this time of year is also less touristy, so hotel costs are lower and you can haggle much more with taxi drivers or in shops because they know there are not as many tourists. They will be more flexible on their prices. Obviously, the historic sites will be less crowded and overall your holiday will be more relaxing. As a bonus, you won't have to worry about cyclones.

The climate influences the island's flora

In contrast to the climate in Mauritius in summer, the winter season is often disrupted by high pressure systems, which are found mainly in the south of the Mascarene Islands, including Mauritius. Unlike their cyclone cousins, anticyclones are less devastating. They originate mainly from the southern currents of the Antarctic and move upwards towards the warm currents of the Indian Ocean. But it is a fact that high pressure systems are more beneficial to surfers with a wind strong enough to make waves, and wind also means kite surfing. So it is undeniable that the country is a tourist country for all tastes.

The climate on the coast of Mauritius

The West and North coasts of Mauritius are generally warmer and less watered than the more windy East and South coasts, which can be pleasant during the heat of the southern summer. On the contrary, during the southern winter, the cool wind blowing from the East can make the most chilly people shy away from swimming (the lagoon is 20/22°C in August, the least hot month), but this does not prevent you from sunbathing on the beach. The central plateau is the region most subject to rainfall and temperatures are 3 to 4°C cooler all year round than by the sea.

The best of the climate in Mauritius: when to choose?

Planning a holiday in Mauritius but don't know when? No problem, you just need to know if you are more for a thrill-seeking holiday with forest escapades under a radiant sun or if you want a holiday to recharge your batteries before tackling your daily activities. Mauritius is the place to go if you want to. But undoubtedly, winter being the low season in terms of tourist arrivals, you will be able to take advantage of it with less crowded hotels and an unequalled tranquillity all this with cheaper rates than in summer. You will also know that if you are keen on going out on the Mauritian coast, temperatures are not a big problem since as shown in our two tables above, there is not much variation in terms of temperature change. The only problem is that the rainfall is much greater in summer than in winter. The choice is now yours…

Going to Mauritius for a spiritual dive

However, if you are planning a trip to Mauritius to immerse yourself in the spiritual world of the island, the best time to visit is at the beginning of the year. During this period, you can enjoy the religious celebrations. You will discover the Thaipoosam Cavadee (end of January-beginning of February), or the magnificent Maha Shivaratri pilgrimage around March. However, this time of year coincides with the heavy rainy season. In addition, the cyclone season runs from November to April. Although heavy rains can cause some damage in some places, they only last a few hours. Don't worry, they won't spoil your holiday.

Travelling to Mauritius when the climate suits you

Mauritius offers a mild tropical climate and up to eight hours of sunshine a day. However, the weather is a factor to consider when choosing the best time to go to Mauritius. The island has two seasons. Summer is hot and humid (October to April), with the risk of cyclones from January to March. Winter is mild and more or less humid (May to September). Average temperatures range from about 27°C in summer to 20°C in winter. Average annual rainfall is 2010 millimetres, most of which falls in summer.