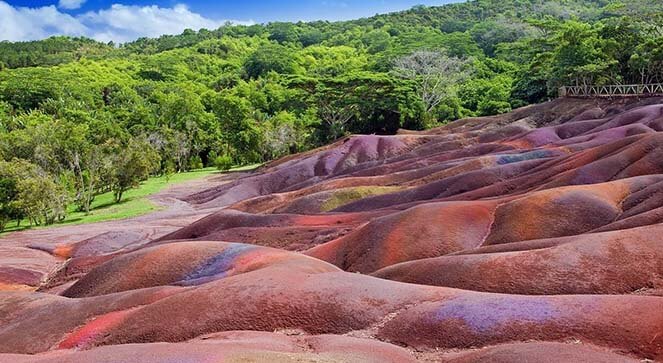 Chamarel, one of the country's most surprising natural phenomena

Mauritius is an endless source of wonder and the work done to preserve the island's natural habitats is, in its image, extraordinary. Mauritius' conservation efforts are all the more important as travellers become more aware of their impact on the environment and take this factor into account when choosing a holiday destination. Few places in the world can boast of such beauty, but more importantly, of doing everything possible to conserve and cultivate it. If you are a tourist in Mauritius, you never pass through Chamarel without visiting one of the country's most surprising natural phenomena. In the streets of the small mountain village, the dense tropical forest gives way to a strange coloured clearing called Les Terres des Sept Couleurs. The ground is made up of small smooth dunes that form a miniature sparkling ocean.

Almost two hours of driving from the capital Port-Louis before a sign points to Chamarel, the land of seven colours. You didn't know what to see in Mauritius? Here is a place not to be missed under any circumstances. The Land of Seven Colours welcomes you with its rocky walls, waterfalls, etc. It is an ideal place for an excursion in Mauritius. You will be blown away by the colours. The Land of Seven Colours is a prominent geological formation. Here again, it seems as if the painter has laid down his giant palette for eternity. Seven variations of natural colours follow one another on a 7,500 m2 hilly strip of land near Chamarel, in the heart of a dense forest.

The incredible colours at Chamarel

The Seven Coloured Lands of Chamarel are dunes with an impressive striped colouring of red, brown, purple, green, blue, violet and yellow. Another interesting feature of the Chamarel Seven Colours Lands is that the dunes never seem to erode, despite the island's tropical and torrential rains. Since the land was first exposed, the rains have carved beautiful patterns into the hillside, creating an earthy meringue effect.

This mixture of colours has become a symbol for the Mauritian nation, reflecting its multicoloured flag and multicultural people. The Land of Seven Colours was discovered by one of the first landowners in the area, Charles-Antoine de Chazal de Chamarel, who inherited the estate in 1785 and gave it his name. Settlers and visitors to the island have long sought to understand what gave this small piece of bare forest such an appearance. It was only with the progress of science that it was revealed that it was a bed of volcanic ash uncovered by erosion. The wind gradually formed small gullies, sculpting the strange contours of this ancient flow.

The different colour shades are thought to be a consequence of the cooling of molten volcanic rock at different external temperatures. However, the causes of their separation have yet to be clarified.

The Land of Seven Colours is well worth a visit. Besides the dunes, there is also a magnificent view of the Chamarel waterfall that you don't want to miss. Next to the dunes also lives a small family of land tortoises.

More than the seven colours

The endemic forest opens onto the ebony forest. More than 200 ebony trees, 300 years old or more, stand proudly. What about the fauna? Apart from the tortoises, we can also admire and take pictures of the deer on the estate. There are about 400 of them. Deer were introduced to Mauritius by Adrien van der Stel, the Dutch governor of Mauritius in 1639. The Dutch settled on the southwest coast near Port Warwick, later named Grand-Port during the French period. The species Cervus timorensis rusa was chosen by the Dutch for its natural resistance. They were raised in pens for their meat. It is agreed that the deer used to go into the wild during a cyclone and populate the whole island, enjoying the lush vegetation and having no natural predators. After a few photo opportunities, you can also head to the Chinese bamboo forest.

The phenomenon in other countries, the Seven Coloured Lands are not unique!

There is no other place on earth that uses the same name for this land as here in Mauritius. However, similar grounds can be found elsewhere in Australia and Papua New Guinea in particular. However, the place has become one of the main tourist attractions of the island since the 1960s. Today the dunes are protected by a wooden fence and visitors are not allowed to climb them. Although they can view the landscape from observation outposts placed along the fence. Every year, thousands of tourists and Mauritians visit Les Terres des Sept Couleurs. Small vials containing the different coloured earths can be bought on site as souvenirs. The site was open to the public for a long time, but for the last twenty years it has been forbidden to walk on the coloured dunes.